David Mills’ song ‘The Rock’: Faith, optimism and a vision for Australia

Initiatives of Change Australia (IofCA) launches ‘Our Uluru Response’ this week on 19 March. The project for ‘truth telling and truth hearing’ aims to support, at the community level, the movement that is building around the call of the Uluru Statement from the Heart, for Voice, Treaty, and Truth.

While the project is new, the friendships and shared initiatives with First Nations people go back two or three generations. Music and theatre are part of the way that IofC works, and this song by David Mills is part of that legacy. 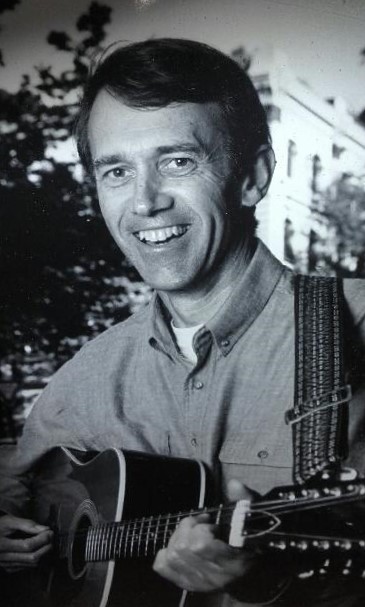 David Mills, born in 1948, was a lifelong worker for IofC. With his wife Jane, he lived and worked for the movement then known as Moral Re-Armament in the UK and the US, before relocating to Sydney, where they raised their family in the suburb of Bardwell Park. For the couple, dedicated to peace and reconciliation work, they were wonderful years.

‘We hosted international conferences, camps for teens, and young people’s training courses,’ Jane recalled. She served on the national board of IofC for 18 years, 12 of those as Chair, while David’s work continued to take him places, usually accompanied by his trusty 12-string guitar.

Singing and songwriting were a natural part of his efforts to bring healing and hope to people everywhere—those far afield, as well as neighbours down the road. Some of his songs have been compiled on CD, and the titles point to the values he lived by: ‘forgiveness’, ‘having love in our heart for the ones who have hurt us’; and ‘how those who’ve suffered have so much to give’, among many others.

In the early 2000s, Australian society reflected some of the tensions exacerbated by the attack on the Twin Towers at the World Trade Center in New York, and the invasion of Iraq by a US-led coalition that included Australian troops. From 2004, David and Jane began organising Muslim-Christian dialogues in Sydney. In the wake of the Cronulla race riots in 2005, these events led to the development of interfaith groups across the city.

Meanwhile, David’s friendship with an opposition politician from the Solomon Islands led to key roles in organising two reconciliation conferences in Honiara, one of them coinciding with the launch of the Truth and Reconciliation Commission with Archbishop Desmond Tutu from South Africa.

‘The Rock’ was written in Australia’s bicentennial year, as David reflected on the bitter legacy of dispossession. He believed that the wrongs of the past could only be healed by returning to eternal and universal values.

Uluru, a sacred site for the Indigenous peoples of Central Australia, represented for him these values, as he sang:

At the heart of this land, there’s a guiding hand

And it leads on through time,

But still they are there, like the rock at the heart of this land.

With characteristic optimism, in the last stanza, he invokes the power of Nature and divinity as a renewing force and a source of hope.

At the heart of this land, there lies a lake like an inland sea

And when water can’t be found, it’s still there beneath the ground

Quenching the dry and despairing hearts that abound…

And still they are there, like the rock at the heart of this land

David passed away in 2012, but his music lives on. The song had a recent airing, as Jane addressed a gathering of Creators of Peace women on the eve of NAIDOC Week 2020. ‘The song is so timely today as we embrace a people’s movement around the Uluru Statement from the Heart,’ she said.