Jane Mills: A Life of Service in Peacebuilding

Jane Mills: A Life of Service in Peacebuilding

During the COVID-19 lockdown, Creators of Peace invited some of the network’s longest-serving practitioners to reflect on their life lessons for a Zoom audience. In November 2020, lofC worker Jane Mills spoke with Tanya Fox. I was born in Kenya, in the midst of the Mau Mau Uprising, a freedom struggle against British colonialism, which grew more and more violent on both sides.

My parents went to the local Anglican church, where the Minister was a man who had studied in Oxford when Frank Buchman (founder of Moral Re-Armament, later Initiatives of Change) was beginning his work of transformation with the students there. My Dad liked this Minister. So, when he came to visit one day and asked Dad if he had ever listened to God, Dad was a bit shocked, but he didn’t throw him out. They went on to have a quiet time together, and this simple experiment began a huge change in our family.

Soon after that, Dad visited the Minister when he was having a meeting with white farmers and black former Mau Mau leaders to see how to take Kenya peacefully into independence. When Dad arrived, they were all roaring with laughter about something together—and Dad thought, ‘This is how we are meant to live.’

During those years, there was a series of multi-racial conferences on an upcountry farm. I remember, at the age of ten, seeing on the platform a white farmer whose family had been killed by the Mau Mau, and a black leader who had been imprisoned by the British at the start of the Mau Mau, who, when released, could not find any of his family again. They stood together, shook hands and pledged to work together, and at that young age I caught the vision that the endless cycles of violence and hate could be broken and a new story could be told.

When I was 14 my Dad’s job came to an end in Kenya and he was offered work in Australia, a place we knew very little about, and where we knew no one…In those days Tasmania was quite insular and I must have been a strange arrival at school with my funny accent. Whatever I said, the boys would parrot it after me, which is not the kind of attention you are looking for when you are 14! The first social occasion I went to, the invite said ‘Bring a Plate.’ I presumed this was to save the washing up—and I brought a plate…I think that experience gave me a heart for the newcomer, as it is not an easy place to be.

I left school with three university scholarships, but I was not quite 17 at the time. So, when I was invited to join a young Moral Re-Armament musical show called ‘Wake Up Matilda,’ which was touring Australia, I thought this would be a great way to have a gap year. As that year drew to a close, I remember having a long quiet time and asking God what I should do next. A clear thought came to me that while the world was getting more and more educated, we seemed less and less able to communicate with each other—and that I should use my life to build bridges between people. I’m not saying this is what everyone should do; I am just sharing my experience. So, I entered the university of life—and I am still there… 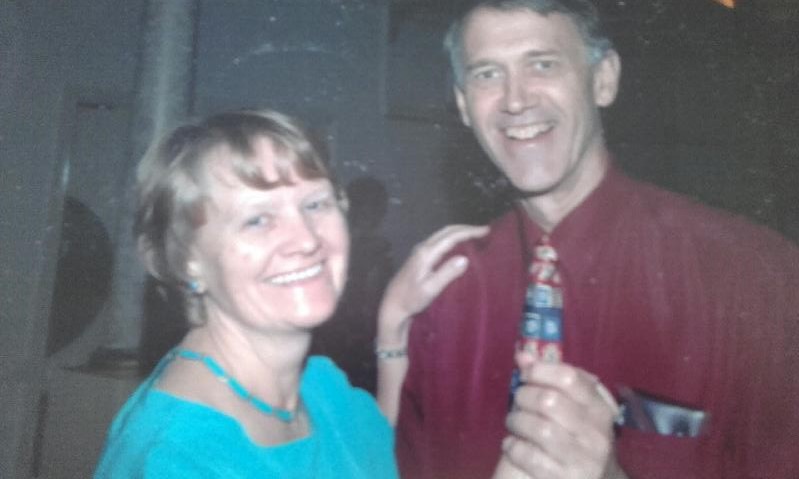 Soon after marrying my husband David, we travelled to the international centre for IofC in Caux, Switzerland, and then on to Britain. We spent two years at a country conference centre in the north of England called Tirley Garth, and two years in the nearby city of Liverpool, doing programs in the schools, and working to build bridges between management and workers, and between the different communities. Towards the end of our time in Liverpool some bad race riots took place and we were able to pull together a major public meeting with a multiracial line up of speakers, because we already had friends in the different communities.

Then we had a year in the US, working with the IofC team to build bridges between the different ethnic communities, and to reach out with the ideas of IofC wherever we could.

On returning to Australia, we had the wonderful experience of many years based in Sydney where our family grew up. Always working with others, we hosted international conferences on peace building, teenage camps, and young people’s training courses. For 18 years, I served on the national board of IofC, including 12 years as Chair.

In the last decade of our time in Sydney we worked with a team to have Muslim/Christian dialogues across the city, hosted by well-known MCs and educating Sydney-siders on the values and commitments we share. We also became involved in the rebuilding of the Solomon Islands after their civil war and, working with a local team, staged two significant peace conferences and a number of training and clean election programs. 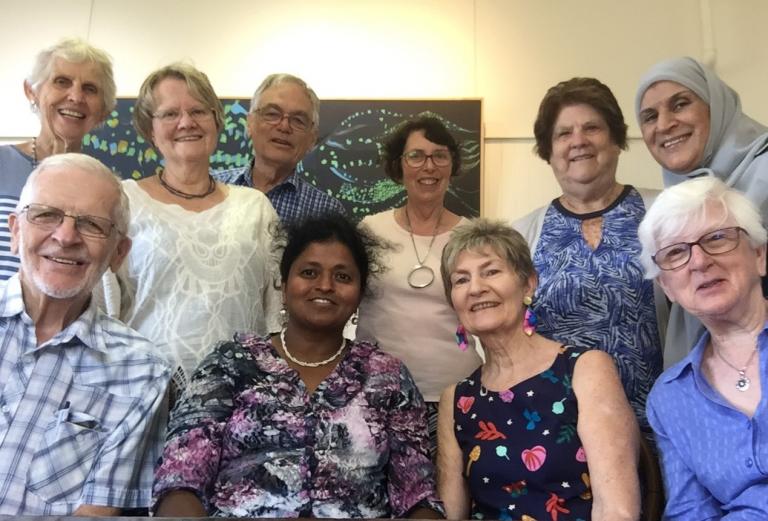 My Dad was a brilliant man with a passion for social justice, and my Mum was very kind. My primary school in Kenya was a Loreto Convent. The nuns were gutsy and reverent women, far from home, with a calling to serve God with faithfulness and joy. They influenced me far more than I realised at the time.

In my time with the worldwide network of Initiatives of Change and Creators of Peace, I have experienced wonderful peer mentoring, learning from people of my own age and from many backgrounds. 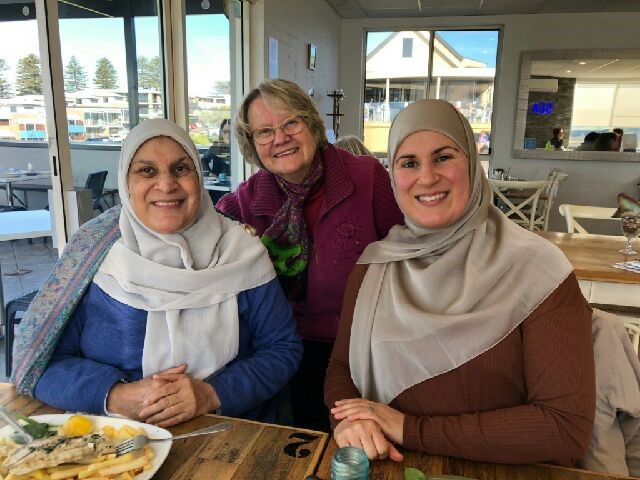 One was Susan Kukiti, a Solomon Islander whose brother had been beheaded and his body thrown in the market place during their civil war in the early 2000s. She was one of two Christian female ministers in the whole country. Through her act of forgiveness towards the tribe who did this, she became a force for great good as the country tried to rebuild. She and I started Creators of Peace Circles in Honiara, but she always wanted to take this program to her traditional Weather Coast of Guadalcanal. I was not able to do this as my husband became sick, but I’m so grateful to others who were able to do so before Susan died in 2011.

Another was Mariam Hijazi, a neighbor when I lived in Sydney. Born and raised in Senegal of Lebanese Shia parents, she and I became close friends and worked on many CoP programs together. It is such a privilege to have friends from different cultures who become sisters. And this is something every Creators of Peace Circle opens the door for, in my experience.

When my husband died, I realised how difficult my culture finds death. We ignore it, never talk about it and when it happens, we don’t know what to do. But Mariam would visit me two or three times a week, wheeling her infant grandchild round while I was sorting through my husband’s things and preparing the home for sale. 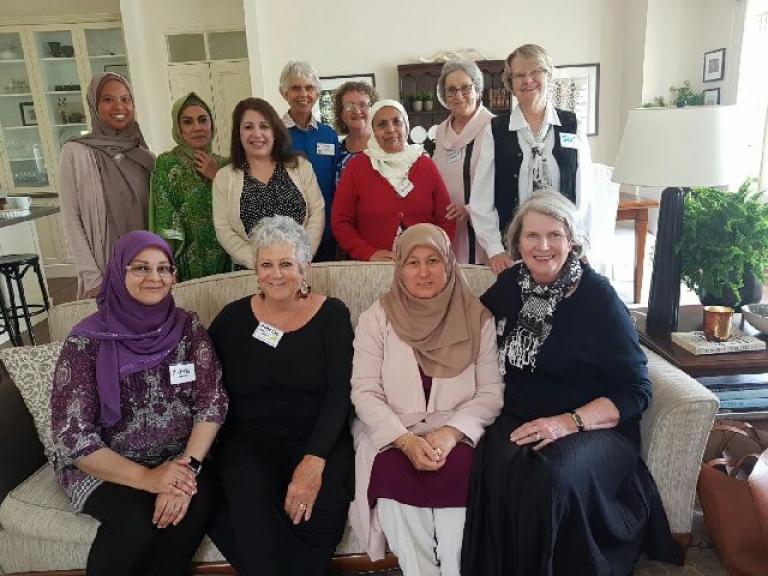 A new start in Gerringong

When I moved south to Gerringong, New South Wales, after David’s death, I was completely spent and had no idea what the future held. I remember crawling along to a new church one Sunday and it happened to have a big banner up the front: ‘We may not know what the future holds—but we know Who holds the future.’ I felt like it had been hung there just for me.

Shortly after that I noticed an article in the local paper about an Open Day for a new Muslim prayer centre in a nearby suburb. My town is very monocultural, so I went along out of curiosity. I remember thinking as I went in that if I met the Queen Bee, I would ask her to bring some friends for morning tea. Well, I sat down straight away right next to this wonderful welcoming Fijian lady, struck up a friendship, and shortly after she brought some friends to morning tea and I found some people who wanted to meet them. For the first year we just met for morning tea in various homes. This grew into a Creators of Peace Circle, and we have continued meeting about six times a year, growing in our peacemaking skills and our understanding.

Relationship building is absolutely key to our work. You can build a new world on paper, but it has to come from people. Change has to start with oneself, and I don’t really see any other way. The sort of peace work we do is not highly-advertised diplomacy. It’s very much behind the scenes.

We build bridges within the family, within community, between communities, and between nations. It’s all about people. We have to remember that people can change, and that’s the hope for humanity.

I’ve lived in many places and haven’t always had roots. I recall saying to an Aboriginal woman who was staying with us, who was working with the Sorry Day Movement, ‘Audrey, I really envy your sacred places because I was born of Welsh parents and lived in Kenya and around the world, and I don’t have that.’ She said something that moved me deeply, even more so because her land was Maralinga, where the nuclear testing devastated the land. She said to me, ‘You can claim your own sacred place. Think of a place with a happy memory or that you love, and claim it.’

So, I was living in Sydney at the time and the next time I visited my parents in Gerringong, I strode to the edge of the cliff where you could see as far as the horizon, and claimed it. And now, my father and mother and husband are all buried in the cemetery in my sacred place. And I’m living here now! I feel I was given permission to do that.

We know lots of people, colleagues and people that we value greatly, but every now and then a kindred spirit comes along and we know who they are for us, and that’s an absolute gift.