A Yarning Circle to Remember

30 community thought-leaders and action-makers from local councils, Indigenous and multicultural organizations were invited by Initiatives of Change Australia to join a deep listening circle with Thomas, to share news on the Uluru Statement from the Heart and outline next steps for the Voice in the Constitution. In contrast to the first acquaintance of this group with Thomas last year, which was filled with nervous and excited energy around a formal ‘war room’ like table, this time we gathered in deep presence.

We were anchored by a ‘Welcome to Country’ centre-piece comprised of collected paper bark and gum leaves from Stonnington streets, beach sand from Boon Wurrung Country, river stone from Wurrundjeri Country and playful red earth from the Armagh tennis court.  Dubious grey clouds loomed with a threat of rain but soon blew away opening into blue sky thinking (occasionally disrupted by calls of the crows). 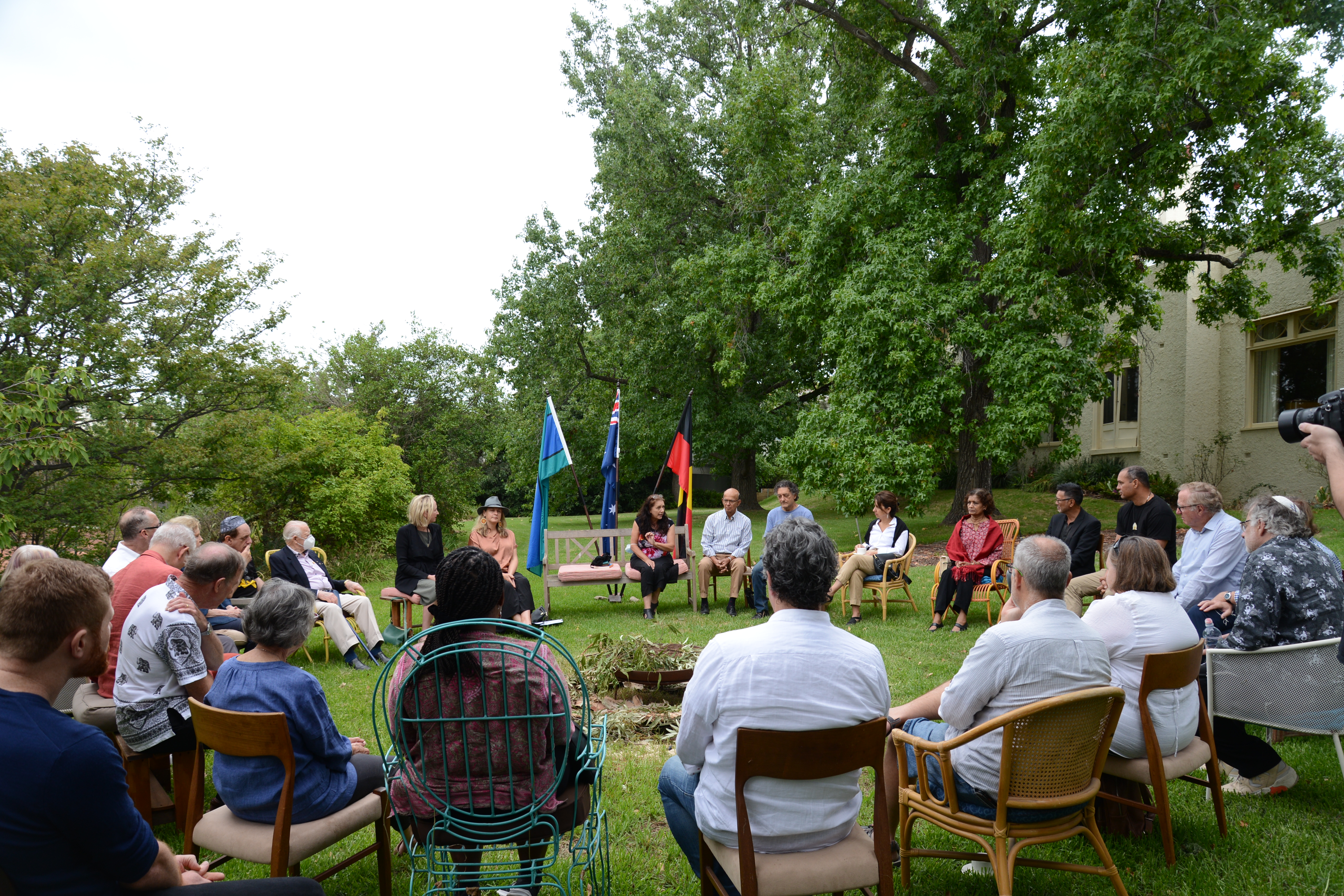 A Key Moment in Time

With strong conviction, Thomas articulated that we are now at a key moment in time; nearing a fork in the road for critical next steps to enshrine a First Nations Voice in the constitution to parliament. Tracing the timeline from 2017 when 250 First Nations delegates gathered in a consensus to sign the Uluru Statement of the Heart, Thomas outlined the obstacles encountered in the past five years to mobilize change. He expressed deep gratitude for organizations like IofCA for punching above their weight in campaigning and bearing the torch over the past year.

Over 10,000 submissions and letters have been received by the Government committee appointed to the ‘Indigenous Voice Co-design Process’ under Minister Wyatt. Over 90% of these called for a Voice to Parliament to be enshrined in the Constitution – even though the Government had excluded any discussion on Constitutional change, the Uluru Statement or its recommended Makarrata commission in the Terms of Reference for the Committee. The committee report, released in December 2021, explored several roadmap outcomes including a legislated Voice which would not require a ‘risky’ referendum but would also not be protected by volatile changes of government. This raises concern that this model would be repeating mistakes in history with the discontinuity of a series of First Nations consultative councils, as happened in the case of abolishing ATSIC in 2004.

A Date has been set

On the fifth anniversary of ‘From the Heart’ campaign, it was exciting to hear that a date for a Voice referendum has been ambitiously set by the Uluru Statement from the Heart campaign team for 27 May 2024. This is a significant date in history. On 27 May 1967 90% of Australian people voted YES in the Referendum enabling Indigenous people to be counted in the census for voting rights and opening the way for Federal Parliament to legislate on Aboriginal affairs.

'It took ten years of campaigning then, but we can’t wait that long this time,’ said Thomas, reiterating part of the Uluru statement, 'Aboriginal people are proportionately the most incarcerated people on the planet.'  Thomas reinforced to the yarning circle that our message needs to cut through political agendas and reach the hearts of Australians — this is a home-grown humanitarian crisis requiring national healing.

Despite this heavy-hearted exploration of the problems, Thomas is optimistic that the Statement of the Heart campaign message is being heard by the Australian People. Even cutting though a pandemic crisis, its momentum is building significantly. In February 2021, polling suggested 49% of Australian people would vote YES in a Voice referendum; after six months of the campaign the polling increased to 57% in August. At this rate, with a targeted education campaign, we could see well over 75% of Australian voting YES by the middle of 2023.

At this critical moment of time nearing a Federal election, Thomas believes the referendum will get up in two years with or without the bipartisan support of elected governments. The fork in the roadmap he referred to was clarifying to the Australian people what it means to vote YES or NO in the referendum. A priority is to protect that choice from political sabotage, independent of whichever leader gets elected in the next term. However, Thomas urges it is critical to use our voting voice to get the First Nations Voice Referendum high on the agenda and up there with climate change, as some of the community leaders suggested.

'Confusion is our enemy,' Thomas shared. Simple focused messages are key whilst allowing any fears to surface and be addressed rationally in dialogue and not hate debate. Some community leaders in the yarning circle highlighted how the campaign to support gay marriage was an effective ‘no brainer’ by being pitched as a basic human right. Community leader unpacked the need for everyday storytelling highlighting how constitutional voice impacts our everyday lives, be it changing the tone of Australia Day to a day of Mourning, or recognizing the Frontier Wars and massacre sites on ANZAC day.

A key pressure point of confusion is around the order of Voice, Treaty, Truth in the Uluru Statement. Some First Nation leaders believe we need Truth before Treaty and that a Voice can be established thereafter.  However the same leaders agree that it may take 20 years for a National Treaty to be negotiated and in the meantime “many voices sing different songs on top of another” and it is difficult to hear anything. A curated chorale of diverse voices could help unite a fragmented approach with the same outcomes for First Peoples: self-determination, recognition and justice.

After deep discussion, and with a fire (and lunch) in our bellies, we gathered under the shade of ‘Wirraway‘ House now accommodating the First Peoples Pathway and the cultural residency with Uncle Shane Charles. The circle gathered more informally, with a carved painting made in response to reading Thomas Mayor’s book Dear Son. After Thomas read an extract of his book, the conversation shifted to the very essence of power dynamics in family relationships. Thomas shared his personal relationship with his own father and the difficulty he had in being heard and respected in his own family growing up. A vulnerable story that helped us understand empathetically how it feels when your voice is not included. It helped us understand the intergenerational effects of compound suffering from a disempowered voice, and the human desire for identity and belonging which can connect us interculturally through heartfelt story sharing. 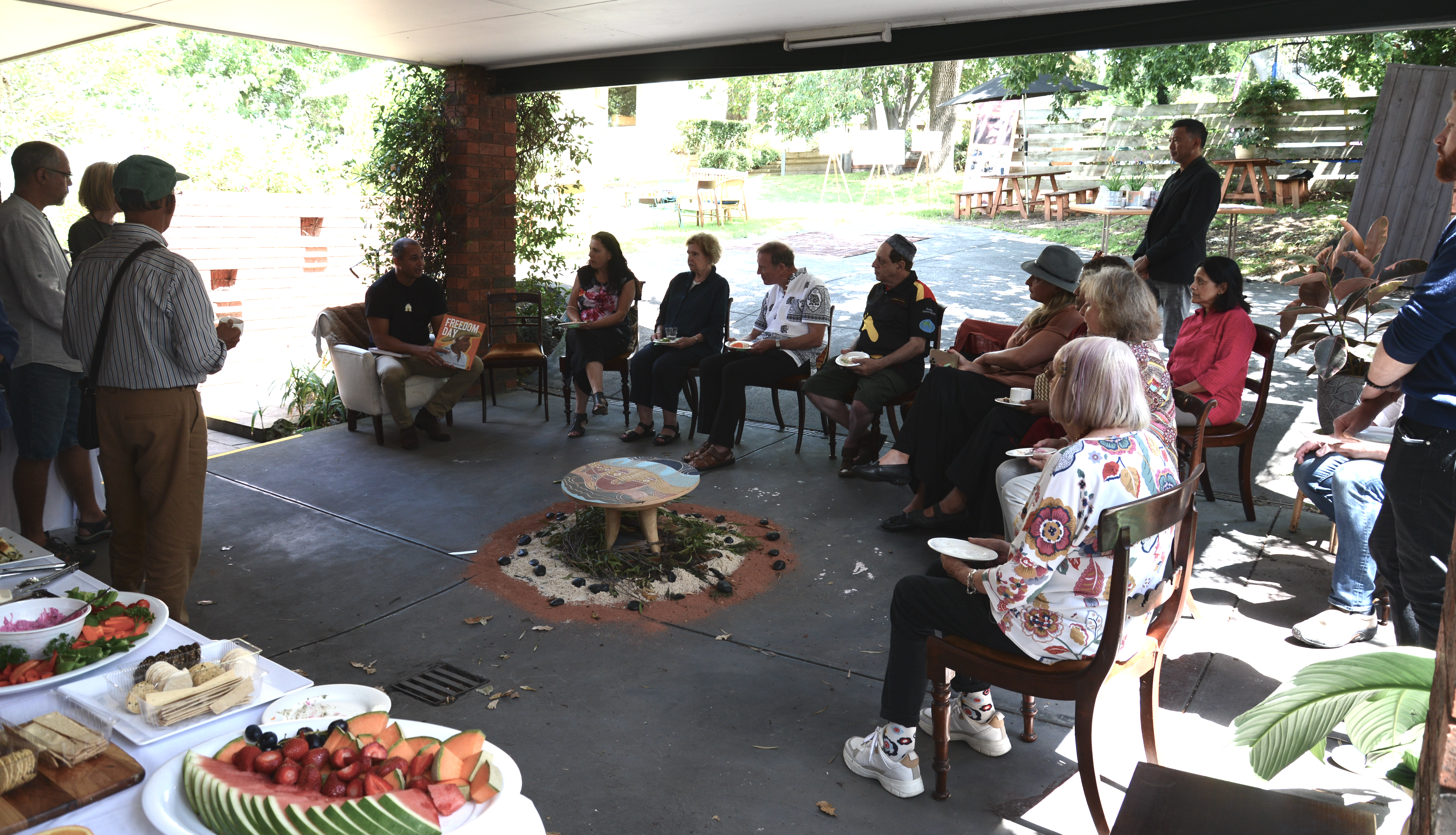 If you would like to participate in engaging yarns with First Nations leaders that you don't hear anywhere else, register your interest for limited places in Turruk: trustbuilding through truth telling and deep listening. Starting 28 April for six weeks, weekly on Thursdays 10 am-1pm, till Thursday 2 June.