An Afternoon with Robyn Hutchinson on 'Taking action for The Voice'

Robyn is the Coordinator for Women’s Reconciliation Network (WRN) & Voice from the Heart Alliance, and Australian General Assembly Representative of the Institute of Cultural Affairs (ICA).

Robyn will share the 'Uluru Statement From The Heart', and thoughts on how we too can join the National movement, and take action for a First Nations Voice in the Constitution. Since first becoming a teacher in 1968, Robyn was committed to embedding Indigenous education into her school community culture. At that time, Robyn, with her late husband, John, (minister of the Uniting Church) worked in Redfern with the Indigenous and multicultural communities in the Inner City Parish of Sydney. They became part of the Ecumenical Institute (now Institute of Cultural Affairs International) working in grassroots social change.

Robyn’s life journey has been devoted to education and social justice, taking her family, to work for 20 years, (in the 70’s – 80’s) mostly on a voluntary basis, with the ICA in India, Kenya and Indonesia. They worked with local communities in local social change programs, such as establishing pre-schools across North Sumatra. A key aspect of this work was applying the ICA facilitation processes, known as Technology of Participation (ToP) acting as catalyst, enabling the local communities to take the lead. On returning to Sydney, Robyn continued her work in Inner-west schools, with a particular focus on raising awareness of Indigenous rights and multicultural education, and undergirding all was ‘Restorative practice’ as a way of life – an example in NZ.

Robyn has maintained close links with IofC over the last 40 years.

Alongside her school focus, Robyn became a part of the Women’s Reconciliation Network in 1996. Today Robyn works with the small NGO, Hand up Congo, and the Institute of Cultural Affairs, in enabling and supporting sustainability in those organisations. Her primary focus over the last 10 years in ‘retirement’ however is in supporting the Reconciliation movement and in particular the Voice to Parliament, through the WRN, and the newly formed ‘Voice from the Heart Alliance’ – (a national network of organizations and individuals committed to the successful VOICE referendum), walking with First Nations Peoples of Australia. 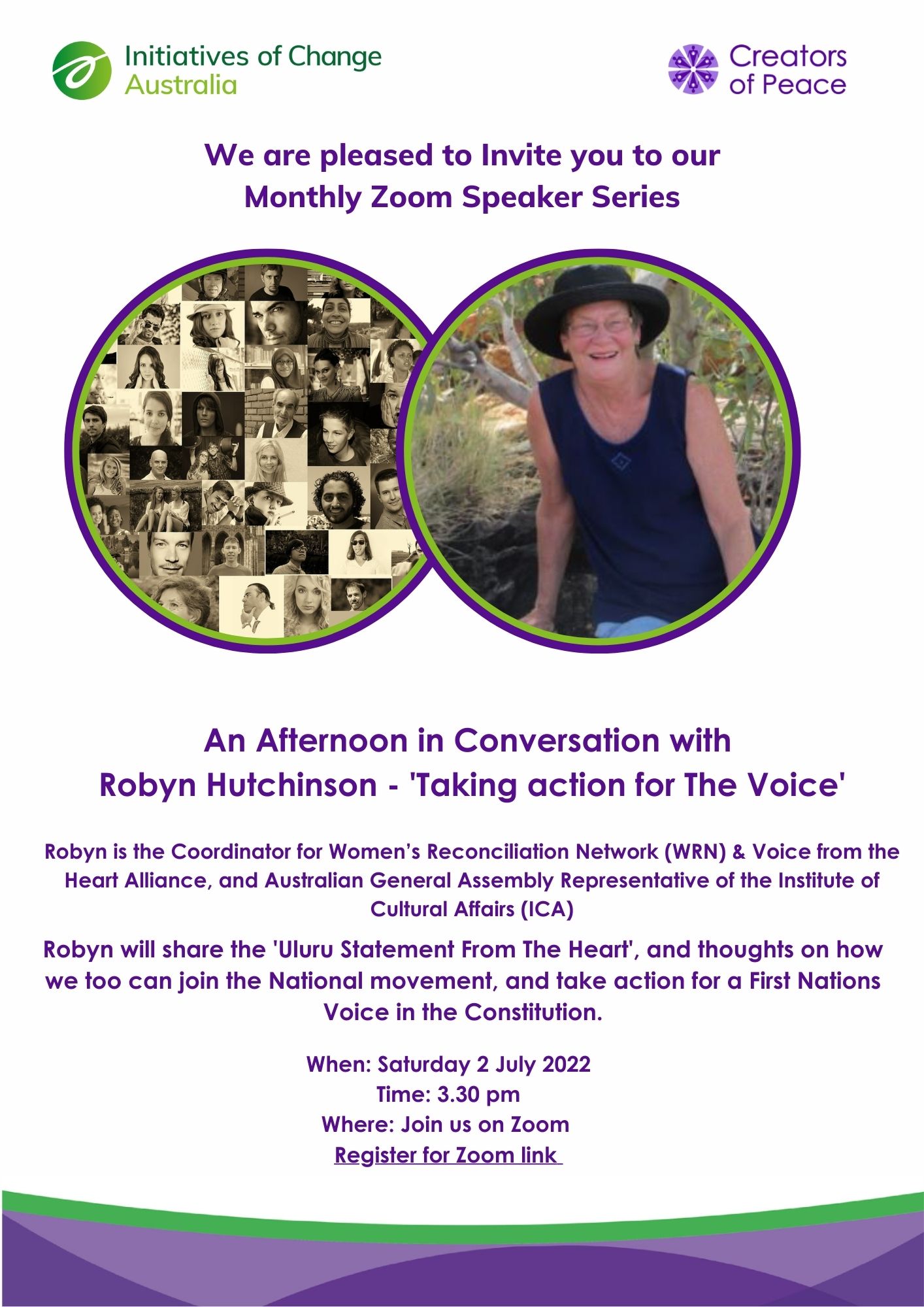